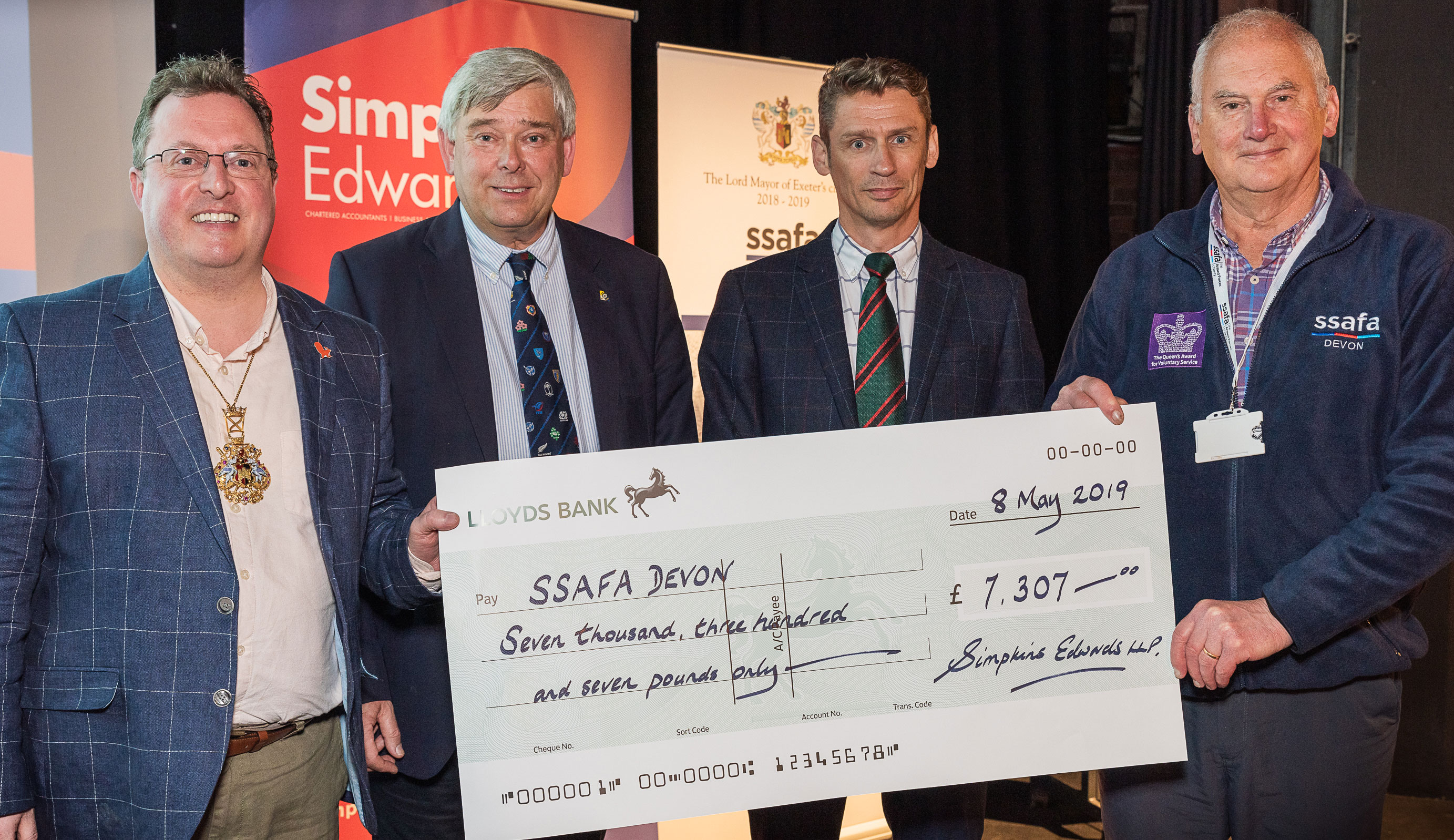 Our 16th annual Really Big Quiz, has raised over £7,000 for the Lord Mayor of Exeter’s charity of the year SSAFA, The Armed Forces Charity.

The quiz, which took place on 8 May, saw 68 teams fight it out for the title of Exeter’s smartest egg-heads. Simpkins Edwards’ very own quiz masters, partners John Coombs and Jean-Paul Quertier, tested the teams with a series of tantalizingly tricky questions over the course of eight rounds, plus a bonus picture round.

At the half way point, the charismatic James Morrish of Kivells auctioned off a series of items including three mystery lots donated by the armed forces. These included: 2 tickets to dine in the Officer’s Mess at 6th Battalion RIFLES Regiment headquarters, Exeter; an invitation for 4 to experience a King’s Squad Pass Out Parade, held at the Royal Marines Commando Training Centre, Lympstone, followed by lunch in the Officer’s Mess hosted by Commandant, Colonel Mike Tanner OBE; and a Coldstream Guards experience for 6 people encompassing watching the Guards’ Public Duties in London or Windsor, participating in field training and enjoying dinner in the Officers’ Mess.

A cheque for £7,314, representing all the money raised by The Really Big Quiz, was presented to the Chairman of SSAFA’s Devon Branch, Brigadier Andy Pillar OBE.

Retaining the cup for the second year on the spin, On Your Marks from St Mark’s Church, won by 5 clear points. The second and third placed teams had to be split by two tie-breaker questions, with the AlisTAirSS from Oxygen House taking second, narrowly squeezing the Quizzly Bears from University of Exeter into third place. 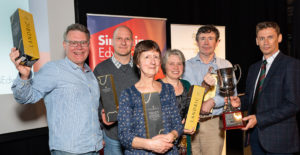 Commenting on the success of the event John Coombs, Partner at Simpkins Edwards, said: “Tonight, businesses and teams from across the county have raised a tremendous amount for a very worthy cause. Through their generosity, The Really Big Quiz has contributed thousands of pounds to the outgoing Lord Mayor’s chosen charity of the year.”

He added: “We’d like to congratulate the team from St Mark’s Church on their handsome victory. We’d also like to thank all those who so generously donated prizes for both the auction and raffle. Without them, tonight would not have been the success that it has been.”

Lord Mayor of Exeter, Councillor Rob Hannaford, commented: “I would like to pay special tribute to Simpkins Edwards who have again organised one of the city’s largest charity fundraising events of the year.

“Over the past 16 years, The Really Big Quiz has raised over £84,000 for the Lord Mayor of Exeter’s charities of the year. This year, the money raised goes to SSAFA’s Devon branch, helping to make a huge difference to members of the armed forces and their families within our communities.”

Jean-Paul Quertier, Partner at Simpkins Edwards, Reservist Lt Col for the RIFLES, and former 2IC, 6 Battalion RIFLES Regiment, Exeter, added: “Together, we have dug deep and donated over £7,000 pounds to a great cause. With the assistance of the Sea Cadets, who collected answer sheets and distributed prizes, the generosity of participants in the quiz, and with the help of our outstanding auctioneer, James Morrish of Kivells, The Really Big Quiz has once again been a tremendous fundraiser for a very worthy local charity.”

Chairman of the Devon Branch of SSAFA, Brigadier Andy Pillar OBE, added: “Huge thanks go to Simpkins Edwards and the Lord Mayor of Exeter. With the help of The Really Big Quiz we will be able to give much needed support to serving and former members of all ranks of the Armed Forces in Devon.

“Last year alone the SSAFA Devon branch supported 600 people with grants of £1/2 million in total. With tonight’s donation we will be able to continue our vital work, which also includes assisting civil partners and former civil partners; spouses and former spouses; partners who are, or were, in an established relationship with a beneficiary; widows and widowers; children who are dependent on a beneficiary and those who provide, or have provided, care for a beneficiary.”

SSAFA Devon is manned entirely by volunteers and works in partnership with other military charities and specialist organisations to ensure that those who turn to it for help get the support they need.

If you wish to help SSAFA look after our deserving service personnel, veterans and their families please call 01392 254611 or email devon.branch@ssafa.org.uk

Events
We use cookies to ensure that we give you the best experience on our website. If you continue without changing your browser settings, we'll assume that you are happy to receive all cookies on this website. However, if you would like to, you can change your cookie settings at any time in your browser settingsOkayCookies Policy
We are here to support businesses through the Coronavirus/COVID-19 outbreak. Click here for more info